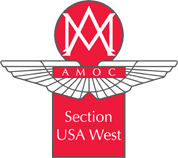 Established in England in 1935, the Aston Martin Owners Club continues to thrive and attracts new Members from around the world, with over 5,000 Members in 40 countries. USA Section West was established in the 1950’s and has about 300 Members on the West Coast.

A Club for enthusiasts and owners of Aston Martin cars, the Aston Martin Owners Club caters for the owners of the earliest pre-war models, through the David Brown era, to the very latest models produced today.

The Aston Martin Owners Club looks forward to sharing our enthusiasm for the marque with the San Francisco International Auto Show visitors. The list of cars expected to be displayed this year include:

Thank you to all of our guests who visited this ye

*Special* Tickets are available for 50% off, just

Which of the 3 cars at the bottom of the escalator